Director Ann Bunyan founded the Rocky Mountain Chamber Singers  in Loveland, Colorado in 1988, with the goal of bringing a cappella choral music to northern Colorado. The group enjoys performing a great variety of styles, from the Renaissance masters through folk songs from around the world, to modern doo-wop, jazz, barbershop and pop/rock. The Chamber Singers revel in the breadth and variety of this literature, which requires an ear for many different styles and a dedication to precision and blend.​

Audience members have raved, “Your selection of pieces is inspired!” and “Such wonderful blend and diction.” Reviews have praised the “…astounding display of virtuosity in technique, execution, style and versatility” and “…exact phrasing, excellent diction, impeccable intonation and a thorough knowledge of every style.”

Recordings include “RMCS A Cappella!”, “Christmas with the Chamber Singers”, “Go Tell It On The Mountain” and “Best of the Rocky Mountain Chamber Singers.” 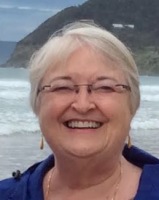 Contact Ann
Ann hails from North Syracuse, New York where she studied piano and flute, performing the Mozart Flute Concerto in D with the Syracuse Symphony as a high school senior.  She received her BM in Piano from the State University of New York (SUNY) at Potsdam.  While singing in the chorus which performed with the Philadelphia Orchestra in the summers, she taught introductory conducting at the Saratoga-Potsdam Choral Institute.  Ann received a MM in choral conducting from Southern Methodist University, under the tutelage of Lloyd Pfautsch.  As a Teaching Assistant directing the Women’s Choir at the University of Texas at Austin, she pursued a doctorate in choral conducting under the direction of Dr. Morris Beachy.
Ann met the Rev. Sathi Bunyan at SMU and two years later, married in India.  They have three children and three grandchildren.  Ann was Director of Choirs at All Saints Episcopal Church, Loveland for 29 years before she and Sathi, who was rector, retired.
As founder of the Rocky Mountain Chamber Singers, Ann has directed the group ever since, except for a sabbatical from 2000-2003.  A cappella music is her forte, for it is the best medium to reveal all the nuances of a choir, from diction to dynamics and phrasing.  She is known for her varied concert selections with music from the Renaissance to modern, including light jazz and pop styles.  Ann offers an eclectic program, knowing that various styles speak to different people, but she always emphasizes musicality, diction, dynamics and excellence in performance.

*Members of the Board of Directors

Follow us on social media for up-to-date information and latest video recordings.